“What do you see? How does it make you feel?” asked Paul Wetzel, Curriculum and Research Administrator, Center for the Environment, Ecological Design, and Sustainability (CEEDS). The waterfall at Paradise Pond was the first viewpoint on Paul’s guided tour of the Mill River, organized in conjunction with the exhibition Maya Lin: Mappings. Participants considered Paul’s questions as they looked out over the waterfall, across the Mill River, to the athletic fields and trees beyond. Responses highlight the different perspectives of the intergenerational group:

Paul’s theme for the interactive discovery walk was the psychology of landscape, inspired by a quotation from Maya Lin. “Each of my works originates from a simple desire to make people aware of their surroundings, not just the physical world but also the psychological world we live in.”  At each stopping point along the lively ninety-minute walking tour, Paul introduced new ways of looking at the immediate surroundings. He led the conversation with questions and observations, then shared maps, historical photos and interdisciplinary perspectives on why and how the riverscape changes over time.

“Control and command” is the phrase Paul used to describe an approach to water management visible in the levees, dams, former mill sites, floodwalls and floodgates along the Mill River. Standing on the levee across from the site of the former Maynard Hoe Factory, Paul asked, “Why was there so much flooding in Northampton?” Encouraging people to think about what was going on upstream, he revealed through photos and historical records the story of potash, and how it played a major role in the deforestation of New England. Located at the bottom of the Mill River watershed, Northampton was more vulnerable to flooding as a result of deforestation upstream.

Curious about the history of flood management, participants followed the Mill River downstream on the lookout for evidence. “You get to see a cross section of the levee!” Paul exclaimed, pointing out flood barrier supports in the wall. Leading the way behind the former Felt Building, Paul brought the group to a bridge overlooking the 1940 diversion of the Mill River by the Army Corps of Engineers. It was an “aha” moment for many in the group who saw and understood the history of this turn in the river for the first time.

Everyone left the walk  brimming with new ideas and questions about past, present and future interactions between people and their river environments. Gina Hall, Museum Educator for School & Family Programs, captured the spirit of the afternoon perfectly. Her 13-year old described the tour as “very fun,” and she reflected, “It was a fantastic connection, truly in the spirit of Maya Lin’s work, and a lovely example of an intergenerational program with something for everyone.”

If you’re interested in learning more about the Mill River from Paradise Pond to South Street, download the walking tour map brochure.

Twenty teachers gathered after school in early March for a private tour of the Maya Lin: Mappings exhibition at the Smith College Museum of Art. The tour was led by Aprile Gallant, Associate Director of Curatorial Affairs and Senior Curator of Prints, Drawings, and Photographs. Gina Hall, Educator for School and Family Programs, and Carol Berner, Department of Education and Child Study, organized the event for Mill River educators to view the exhibition and explore connections to their students. Participants included teachers from six schools (pre-k through college); arts educators; community-based tutors and mentors; an eco-psychologist; and a graduate student in engineering. Everyone seemed excited to come together in person to experience the artwork, learn about Maya Lin and explore new directions for teaching and learning about climate change.

Aprile guided the group through the gallery with intriguing details about Maya Lin’s background, vision and creative processes. Looking closely at  the pin river map of the Connecticut River, teachers were bursting with questions for Aprile, from “How was the piece installed?” to “Where are we on the map?” Aprile’s insightful interpretation energized participants’ interactions with the artworks. One teacher reflected about the afternoon: “I left feeling inspired by the provocation and captivated by the beauty of the exhibit itself, and also by how it remains with me as I encounter new maps and as I respond with new eyes to the familiar landscape around me.”

How might we bring this work to our students?

After the tour, teachers gathered in a circle in the gallery to share ideas for engaging students. The dialogue reflected participants’ wide-ranging contexts and interests. As teachers built on each other’s ideas, the list of possibilities for student interactions with the work kept expanding in different directions:

“What a wonderful experience you provided for all of us yesterday afternoon!”

Many thanks to Gina Hall and Aprile Gallant for inviting the Mill River educators to enjoy a special tour of the exhibition and a rich discussion of possibilities for educators. Be sure to check out the Resources for Teachers compiled by Gina, with relevant videos, links, articles and lesson plans. Please share your activities or teaching ideas inspired by the exhibit (use the comments below or email Carol) and stay tuned for follow-up events this spring sponsored by RIVER (River Inquiry via Exploration of our Region).

We’ve returned just in time to bring you some joy during these hard times. Lots has been happening to all of us, and for MRGI, it’s been a time to focus our energies. on:
1. A new website;
2. Extending the greenway itself;
3. A Mill River Learning Initiative.

We’ll leave #s 2 and 3 for an email next month, but right now, please concentrate on the new website. The url hasn’t changed, but Neal Bastek, our comrade in arms for a decade, has finished his amazing work, and we’ve now hired Carey Baker of Midnightson Designs to create our new one. We have no idea whether this design works or not, and it’s still in progress.

We need you to make this a responsive site. Send us your evaluation, your suggestions, edits, your furious grumblings and joyful outbursts. Whatever you’ve got, we can not only handle it, we need it! Send it along to us at info@millrivergreenway.org.

Fund Drive to Link the Mill River to Broad Brook

Please help the City of Northampton acquire this critical link!

Steve McDonough on behalf of the Leeds Civic Association, Friends of Northampton Trails, and Yours Truly urge you to contribute to this great project. Here’s how Steve describes it:

Northampton seeks to purchase 44.7 acres of land in Leeds located north of Beaver Brook between Haydenville Road and the Leeds bike path.  The acquisition would expand the current Beaver Brook conservation area while helping to connect the Mill River Greenway to the Beaver Brook/Broad Brook Greenway and Broad Brook/Fitzgerald Lake Greenway.

As we send this message out to you MRGI folk on January 13, we already have more than $2000 donated of the $15000 goal. You can donate directly to the City of Northampton via the Office of Planning and Sustainability, 210 Main St., Northampton, MA 01060 or simply click on this site: https://charity.gofundme.com/o/en/team/beaver-brook-land-purchase

Due to the property’s connection with the other conservation areas, it is also important as a wildlife corridor.  Deer, bear, deer, fox, porcupines and turkeys have all been sited on a frequent basis.  And just in the past few months, river otters have been spotted in Beaver Brook on at least two occasions, likely using it as a migration route to and from the Mill River!

The area has become a popular recreation area as it connects with the trails along the Mill River Greenway and the Beaver Brook Conservation area with the main access off the bike path near the Beaver Brook bridge.  There are about 2 miles of well-maintained trails on the property and also some ‘bread crumb’ trails that lead out to Route 9 and the new wildlife blind.

The acquisition would also add a major land parcel in support of Northampton’s Multi-Use Trail Plan to develop a Northampton trail that encircles the city building on existing trail networks where possible.

Thanks from all of us at MRGI, LCA, FNT, and the City of Northampton! 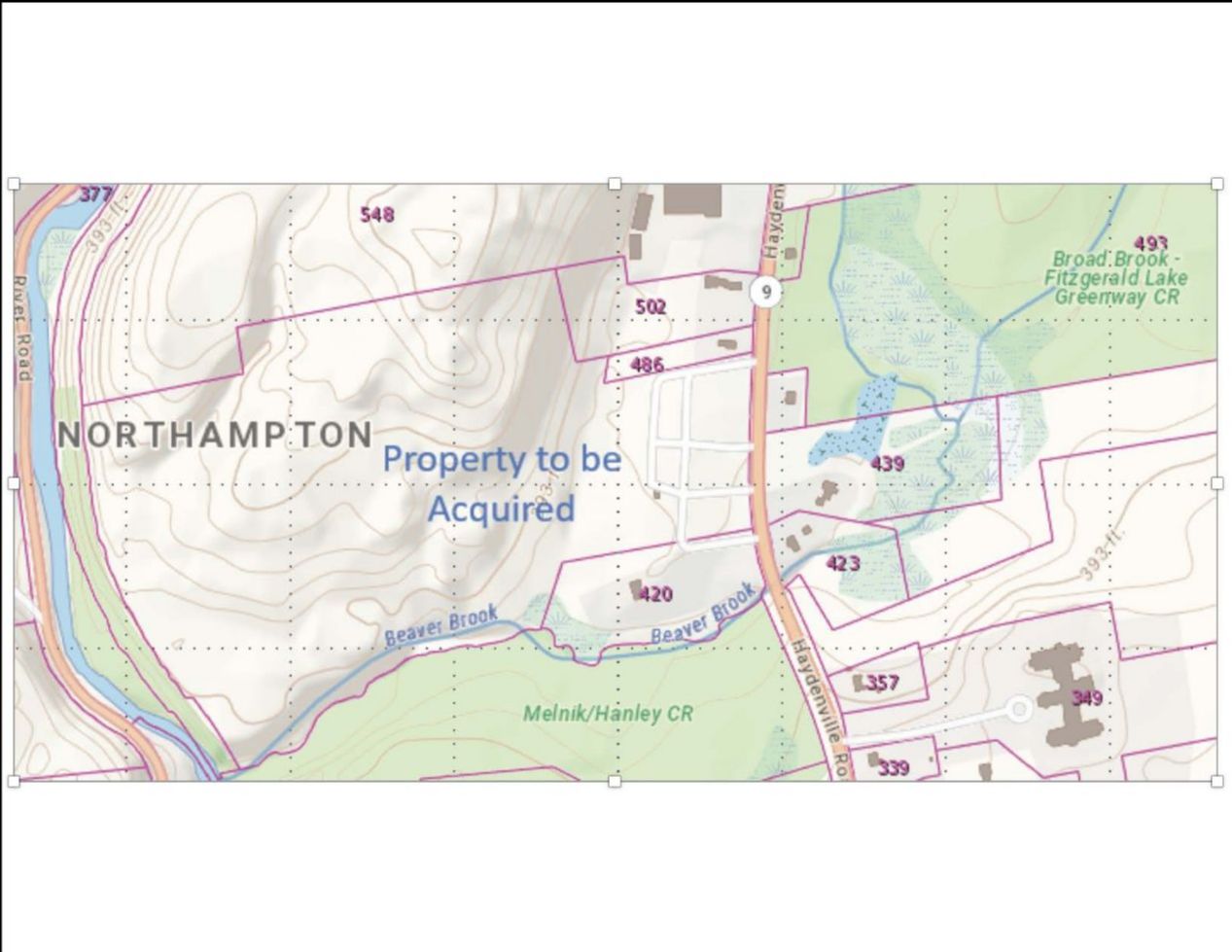